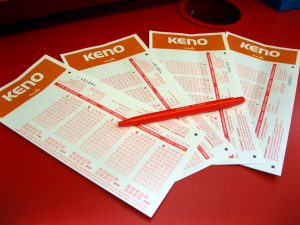 Keno is a popular casino based game that provides similar features to Lottery and Bingo. However, unlike Bingo, multiple players have the opportunity to win as you have the ability to choose the numbers you play as you would in lottery games. There are however a few key differences that makes Keno unique and provides players with an exciting reward opportunity. The game can be played at land-based casinos where players would buy tickets or online, which provides the same type of game but with a lot more options regarding ticket values and reward opportunities.

There are different variations of Keno available. However, most of them are based on the standard rules and consists of a board with 80 numbers. Players get to choose 10 of these figures and need at least 5 number to match before a winning is granted. The more numbers match, the higher your reward will be. The game is very easy to play and provides a great range of winning opportunities to take advantage of.  Other variations provide a different amount of numbers, allow players to choose more numbers, and more than 20 draw numbers take place. The game that offers advantages in some regions will have disadvantages in other regions to ensure the house edge remains. This means while you might be able to choose more numbers, the possibility of a bigger board is also possible.

Casino, Poker and Sportsbook in one

Caesars Casino
Up to $300 on your first deposit

Virgin Casino
Up To $100 Cash Back

Tropicana Casino
Refund on net losses up to $100

The History of Keno

Although the word “keno” has been derived from the Latin word “quini,” which means “five each,” or the French word “quine,” which means “five winning numbers,” the game has its origins in ancient China. Legends are saying that the game was invented to raise funds to save a city in wartime. The game was also played to raise money for the construction of the Great Wall of China. Certain ancient documents reveal that carrier pigeons were used in China to carry keno results to people in distant cities. The Chinese carried the game to the West in the nineteenth century. Later, the game became popular as “Keno” in Houston, Texas. Today, Keno can be played at various online casinos as well as land-based casinos from around the world. The game can be played in many ways, including one on one against the casino or as a group, which consists of a much bigger board and multiple players, much like Bingo where numbers are drawn, and players check how many winning numbers they have.

How to Play Keno Online 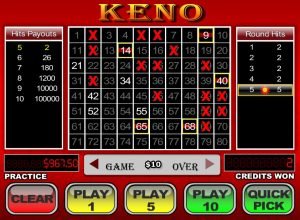 The online variation of Keno is a very exciting game and is played at a fast pace. Many developers provide Keno, which consists of different backgrounds and gaming options. This means you will have the opportunity to choose the game that suits you best and the rules you most prefer.

To play the game online, all you need is a positive account balance and select Keno. On your screen, a board of 80 numbers will appear with betting options at the bottom of the screen. This will include betting options per round, meaning if you select $1, it will be the value per game. This value is also used to provide winnings, meaning a higher value will offer a higher payout once it has been multiplied by the bet amount per round.

Players can now select 10 numbers they thin will appear with the next draw. These figures can be set in any way you please, which means you can create patterns or simply choose your lucky numbers.

Once you press deal, the game will drop 20 balls in completely random positions, which is determined by the random number generator. Should at least 5 of the balls appear in the positions you’ve selected, a winning will be granted. The more numbers you get correct, the higher the payout will be, meaning you will gain more rewards. Payouts are made in coins, which are multiplied by your bet. These payouts will remain the same irrespective of your wager amount as they are multiplied by the value of your bet.

Other Variations of Keno

Some online casino game developers also provide Keno in a live format. The game can be presented in many different ways, including how the balls are mixed and selected. This form of the game has become very popular over the last few years as players can see the dealer as a sign of trust that it is 100% fair. Live dealer Keno can be found in the same menu where other live dealer games are presented.

Playing Keno on mobile provides the same advantages as the PC version. In fact, the exact same game is displayed on mobile devices along with live dealer options as well. Players can join various online casinos and take advantage of mobile Keno, which only differs from the PC version when it comes to betting options and game settings as this will be displayed in a menu button shown either at the very top or at the bottom of your screen. This is where players can choose different bets per round and also adjust game settings regarding sound and graphic features.

Odds and Payouts in the Game of Keno

Since there are 80 numbers on the board, of which you can only choose ten, and only 20 balls provide the winning numbers, you will find the odds are rather low, which is why the payouts provide much bigger rewards.

The higher the winnings go, the less chance you have of winning. However, being lucky enjoy to get more than 6 numbers involved with a winning round is sure to surprise, no matter what bet you’ve selected. Getting 7 numbers in a win only occurs on average 1 in 8.826 times, which means odds of just over 11.3%. However, this will result in a win of 142x your bet value. Having 8 correct numbers will provide 1,000 times your bet, which occurs once is 20. 055 times. Getting 9 numbers is obviously a huge achievement, which comes with a massive payout of 4,500 times your bet total. The chances of this happening are one in 61.420 or 4.98%. Finally, since you can only choose 10 numbers, the highest payout occurs when you get 10 numbers correct. This will payout 10,000 times your bet value per round, which happens 1 in 253.801 times, which gives you a percentage of 0.39%.

As mentioned, there are other variations of the game, which includes different payouts and odds. However, the rewards mentioned above are a great guideline as to what you can expect in winnings. This also makes it very obvious that Keno is a game of chance and luck.

Since the odds are rather low with bigger winnings in Keno, it’s important to consider a few strategies to play the game and keep your rewards up. The first thing you need to do is find a strategy and build confidence in it by either playing with a very low bet so you can see if it works or trying it on a free variation of Keno.

Some professional would also say do not play the same numbers over and over. However, results have proven that playing the same pattern over some hands is more likely to provide regular payouts. Be sure not to play a single string of numbers as well, such as 1, 2, 3, 4, 5, 6, 7, 8, 9, and 10 as this will decrease your odds of winnings. Many prefer certain shapes such as diamonds in the center of the board across that covers multiple numbers. Also, do not hesitate to leave numbers open and over other with a pattern as this could just result in the win you’ve been looking for. The fact is the numbers fall in random positions, which could be the pattern you’ve selected.

We recommend playing your selected numbers or pattern for at least 10 rounds to see if it has been effective or not. To be sure, leave the pattern for as long as you want with a lower bet. However, also keep in mind that there is not perfect pattern as the numbers will not appear on the selected numbers over and over.

Finally, be sure to use the information offered by the game, including hot and cold numbers. This could very well provide you with an advantage when creating a pattern over the figures. However, don’t only play hot numbers and mix it up from time to time try and cover the randomness of the game.

All posts from admin