The Invisible Man is Net Entertainment’s (NetEnt) science fiction slot, based on a thirties movie inspired by H. G. Well’s novel of 1897. The slot is packed with innovative features such as walking wilds, re-spins, and free spins, which allow players to win plenty of prizes.

Playing The Invisible Man Slot is very easy as it is based on standard slots rules. The game comes with 20 paylines, and players should first select the number of paylines they would like to activate. The slot allows a maximum bet of 10 coins per activated payline. Since the coin values range from $0.01 to $0.50, players can bet as little as $0.01 to as much as $100.00. Once they place a bet, they only have to hit the Spin button to set the reels spinning. Players can now get paid for hitting winning combinations and unlocking bonus features.

The Invisible Man is inspired by a classic movie of the early thirties, which is in turn inspired by H. G. Well’s science-fiction novel of the same name, published in 1897. The slot revolves around the tale of a crazy scientist who tries to find out how to become invisible. The slot features brilliant graphics, audio effects, and animations, and the reels feature icons of policemen, Griffin, the scientist, and high-value cards.

The Police Spins Feature comes with 3 free spins with random burning wilds. In the Griffin’s Rage Bonus Game, players need to select a location to win multipliers and cash prizes.

The Invisible Man is available for fun or real money at any NetEnt online casino. 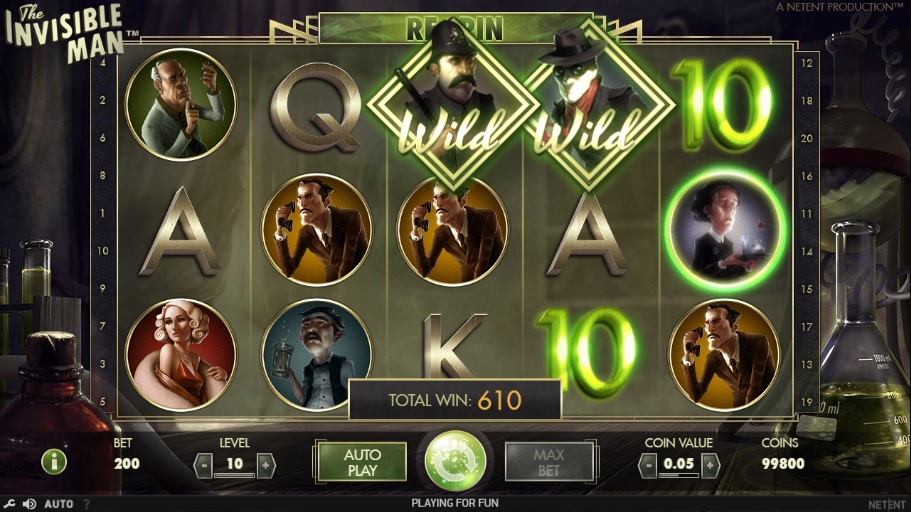