South Park has 25 fixed paylines, eliminating the need for players to manually select the lines they would like to play. Players can bet up to 10 coins per activated payline, choosing from a coin value range of $0.01 to $1.00. The max bet for South Park slot is $250.00, which makes it the high-rollers favorite slot.

The reels of South Park feature icons of high-value cards along with Cartman, Kyle, Kenny, and Stan. Players who have previously enjoyed watching South Park will be familiar with these lively characters. The slot features animations, audio effects, and graphics lifted directly from the sitcom, giving players the feeling that they are watching it all over again.

An icon marked WILD serves as the wild substitute in case of South Park slot. But players should note that it does not substitute for the bonus symbols to help players unlock the bonus features.

In the Cartman Bonus Game, Cartman has to search through the bushes for coin wins or multipliers. The game ends if a police officer appears on the scene and nabs Cartman. The Stan Bonus Game features a sticky wild symbol, which appears at random all over the reels and remain frozen in position while the reels are re-spun twice.

The slot is available for fun or real money play at any NetEnt-powered online casino. 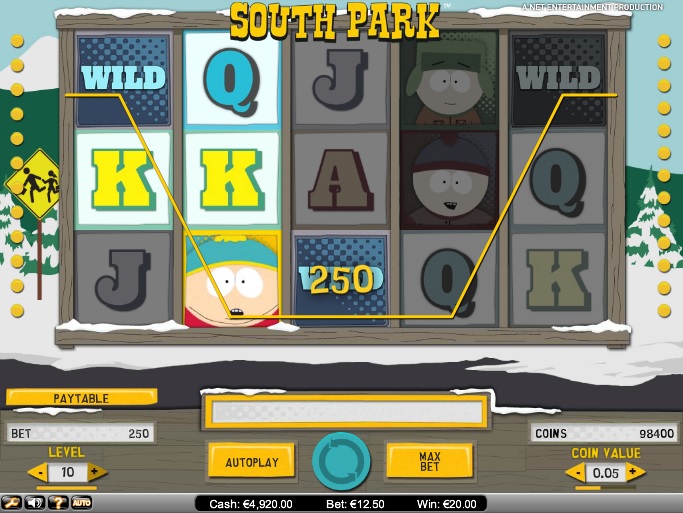