Mega Moolah, a Microgaming progressive slot that has been around from 2008, challenges players to win one of four progressive jackpots.

Mega Moolah is a progressive slot with four progressive jackpots, 5 reels, and 25 paylines. Although packed with exciting special features, the slot is incredibly easy to play. Players need to first place a bet, spin the reels, and collect payouts if a winning combination of icons is created. The slot has an affordable coin value range of $0.01 to $0.05, and players are allowed to bet up to 125 coins per game. The max bet for this slot is therefore $6.25, which is definitely not much considering the fact that it can transform players into millionaires.

Mega Moolah is based on the theme of an African safari. The reels are packed with icons of wild creatures such as giraffes, lions, elephants, and monkeys. A few high-value card icons can also be seen.

The game features astounding graphics that are brilliant and crystal clear. The sounds effects are excellent, but players can turn them off if they wish.

Mega Moolah features a wild multiplier symbol, a scatter symbol, and a free spins round, which players can use to win big money. The Monkey symbol serves as the scatter, which means that combinations of Monkey symbols do not have to appear along an active payline to fetch payouts. If players spin a combination of at least three Monkey symbols anywhere on the reels, the free spins bonus round gets activated.

Players can play Mega Moolah at any Microgaming online casino. 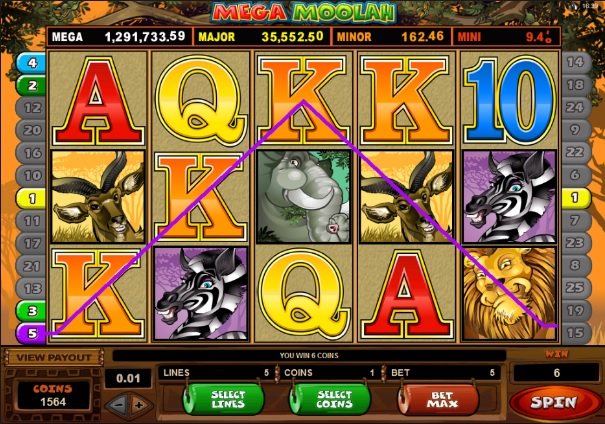