Gunslinger, a Play N Go online video slot based on the Wild West theme, comes with plenty of bonus features and a top jackpot of 10,000 coins for a combination of five Cowboy wild symbols.

Since the slot is based on the Wild West theme, its reels are populated with symbols one usually sees in Wild West movies. There are high-value playing cards, cowboys, sacks of gold, and other thematic icons.

Whenever players create a winning combination with the high-value card symbols, the amount of cash in the jackpot that is located above the reels will increase. When players have created winning combinations with all the card icons, they will be prompted to play a simple game, in which they will have to turn over the face-down cards to reveal cash prizes. If players get five Sheriff’s badges while turning over the cards, they will win the jackpot.

The Bounty Hunt Bonus Game gets activated by the appearance of at least three Wanted Poster symbols on an activated line. The game challenges players to shoot barrels to get prizes and to guess their opponent’s move to win a multiplier value for those prizes.

There is also an optional gamble game, which gets activated whenever players hit a winning combination. Players can either double or quadruple their winnings in this feature.

Gunslinger has an impressive soundtrack, plenty of bonus features, and the ability to retain players for hours. If players love the Wild West theme, this is one slot they will surely want to try. The game is available at any casino that offers PlayNGo games. 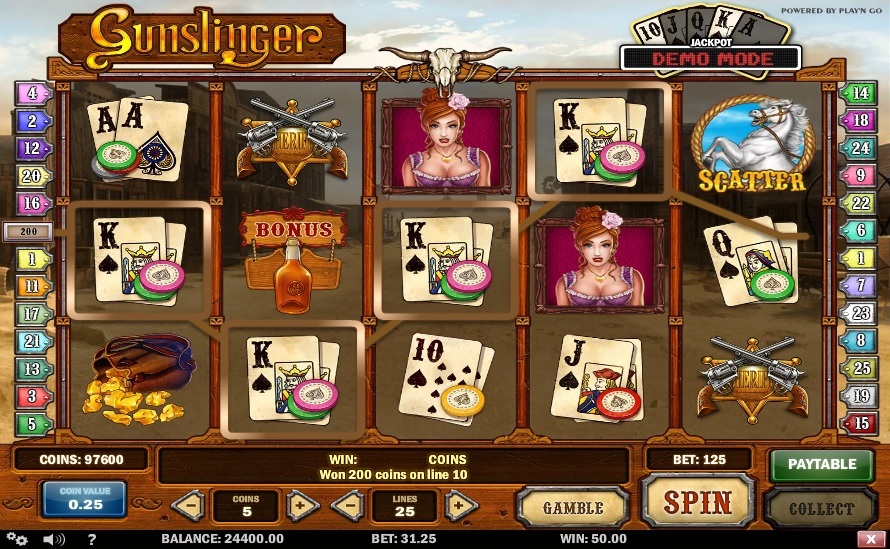