PlayNGo’s Golden Ticket is a circus-themed slot with multipliers, wild symbols, and an innovative bonus game with free spins.

Golden Ticket slot is based on standard slots rules. Players have to first place a bet, choosing from one of the fixed bet values of $0.20, $1.00, $2.00, $10.00, and $40.00. Once they place their bets, players should hit on the Start button. The reels do not spin the conventional way. The symbols just vanish and fresh symbols appear on the screen. If a winning combination is displayed, players will win a prize along with a multiplier value. If players do not like the idea of hitting the Start button continuously, they can use the Autoplay feature to play the game automatically. If players would like to change the game settings, they are free to do so.

Golden Ticket, an online video slot based on the circus theme, features exciting circus-themed graphics and imagery. The reels are set against a circus stage and feature symbols of characters and things one normally finds in circuses—clowns, strongmen, dumbbells, top hats, magicians, and others. The sound effects and ambience music are charming, adding to the circus theme and making the slot very interesting to play.

In spite of its similarities with Energoonz, Golden Ticket slot stands in a class of its own as far as bonus features are concerned. The slot’s cascading symbols feature is the most exciting. It gets activated whenever players create a winning combination of symbols. The symbols in the winning combination vanish and new symbols fall into the empty space created from above, leading to more wins and larger prizes.

The slot also comes with a Golden Ticket Bonus Game. Whenever players spin the reels, the word BONUS appears behind any two randomly selected reels. The bonus game gets activated if players clear any of these reels of symbols during the cascading symbols feature. Players will then be directed to another screen displaying a shooting gallery and given ten free spins. The goal is to create winning combinations and win prizes. If players land five bonus symbols anywhere on the reels, they will win five extra free spins.

The slot also comes with a multiplier meter, which is located to the left of its reels. The multiplier value increases with each win, giving players opportunities to win really big prizes.

Golden Ticket is available for fun or real money play at any online casino that offers Play N Go games. 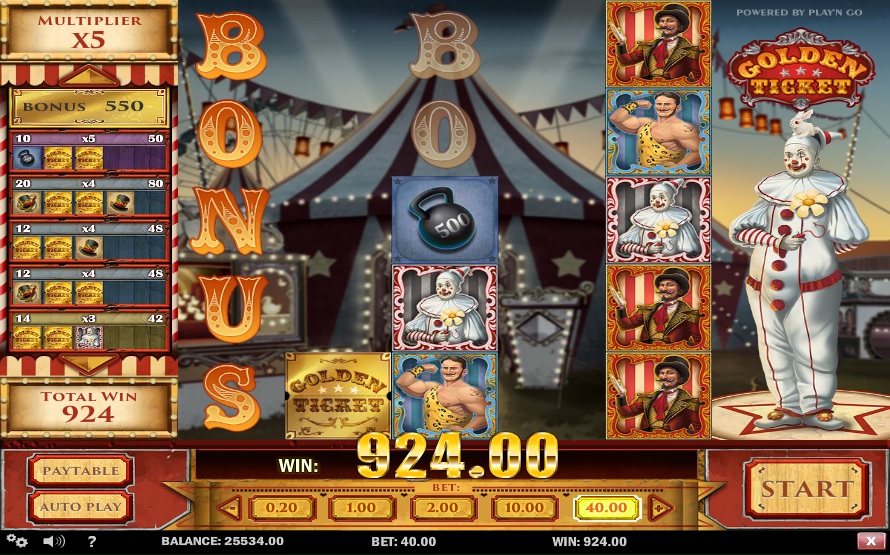