Net Entertainment’s (NetEnt) monster-themed slot Frankenstein is one of the most lucrative slots thanks to its multipliers, wild symbols, and a top fixed jackpot of 1,500 coins.

To start playing, players should first choose the number of paylines they would like to play. The slot has 20 paylines and a coin value range of $0.01 to $0.50. Players can bet up to 10 coins per active payline, which makes $100.00 the max bet for Frankenstein slot. After placing their bets, players can hit the Spin button to set the reels spinning. They will receive payouts if a winning combination of symbols is created on the reels at the end of a spin.

Since Frankenstein is a NetEnt slot, it comes with a Skill Stop Feature that converts a game of chance into a game of skill. This feature allows players to stop the reels in mid-spin to capture winning combinations, unlock bonus features, and win extra prizes.

The reels feature characters from Shelley’s book and astounding sound tracks and audio effects from the Universal movie. As players spin the reels, they will come across icons of brains, monsters, Dr. Frankenstein, and high-value cards. The slot owes its popularity to its brilliant graphics, amazing animations, and realistic audio effects.

The Lightening Rod symbol serves as the wild, helping players complete winning combinations and win extra prizes. On the downside, it appears only on the second, third, and fourth reels and does not substitute for the scatter symbol. The wild symbols are special as they are linked symbols that appear all over the reels and convert at least two symbols in the neighborhood into wilds. During the free spins round, these wild symbols turn into Fire Wild symbols, which also appear in the linked form, spreading over the reels and converting at least two symbols into wilds.

Frankenstein can be played for free or real money at any NetEnt online casino. 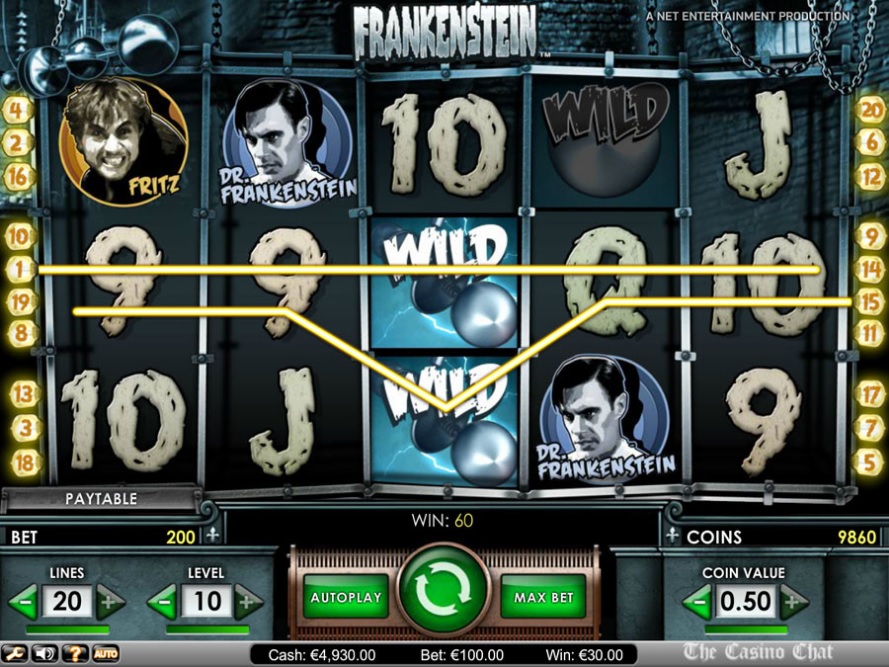