Playing Boom Brothers is as simple as placing the bet, spinning the reels, and collecting payouts if a winning combination is displayed. Players can activate as many or as few of the 20 paylines, bet up to 5 coins per active line, and choose from a coin value range of $0.01 to $1.00. The max bet for Boom Brothers is therefore $100.00 per game. Players can also customize their gaming experience using features such as Autoplay.

Boom Brothers, an exciting 3D video slot, is based on three miner brothers mining for rubies, diamonds, and gold. The slot features splendid graphics, entertaining animations, and realistic mining sound effects. It gives players the feeling of going on a treasure hunt and unearthing plenty of riches. The reels feature symbols of the three Boom Brothers, mechanical robots, and mining lamps, pails, picks, and helmets.

The Bomb symbol serves as the wild, which players can use to complete winning combinations as it substitutes for all other icons except for the scatter symbols.

If players spin three Rail Track symbols anywhere on the first, second, and third reels, the Rail Track Feature gets activated. This feature challenges players to complete a rail track for the Boom Brothers to cross over. If this happens, the Boom Brothers Feature gets activated. As soon as players complete the rail track, they will receive a multiplier of x4.

Boom Brothers is available for fun or real money at any NetEnt online casino. 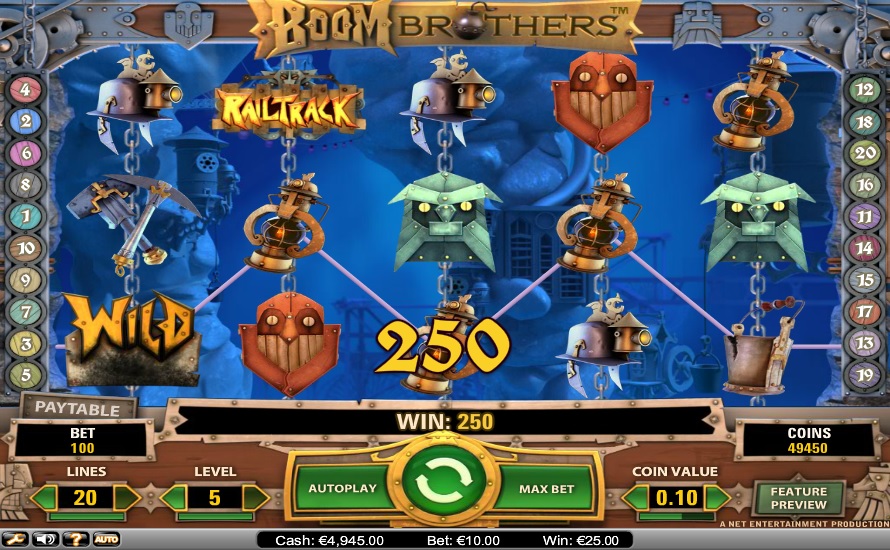