Alien Robots, a Net Entertainment (NetEnt) slot, is based on the science fiction theme. Packed with brilliant features, this slot offers several opportunities for players to strike it rich.

To play Alien Robots, players need to first place a bet and then hit the spin option. They will get paid according to the game’s payout structure if a winning combination is displayed on the reels at the end of a spin. If no winning combination is displayed, players can place another bet and try again. Like all other NetEnt slots, Alien Robots also has an Autoplay and a Skill Stop Feature.

Alien Robots, a NetEnt slot with beautiful graphics and thrilling audio effects, is based on the science fiction theme. While spinning the reels, players can hear a humming sound that makes them feel as if they are travelling in a spaceship. The slot is capable of taking players into outer space, where they can interact with extra terrestrial creatures. The reels feature icons of an entire robot family—baby robot, security robot, dog robot, construction robot, and butler robot. There are also a few high-value cards scattered across the reels.

The Alien Robot serves the function of the wild; it substitutes for other icons across the reels and helps players to complete winning combination. However, the wild cannot substitute for the scatter symbol to help players unlock the free spins bonus.

Alien Robots is available for fun or real money play at any NetEnt online casino. 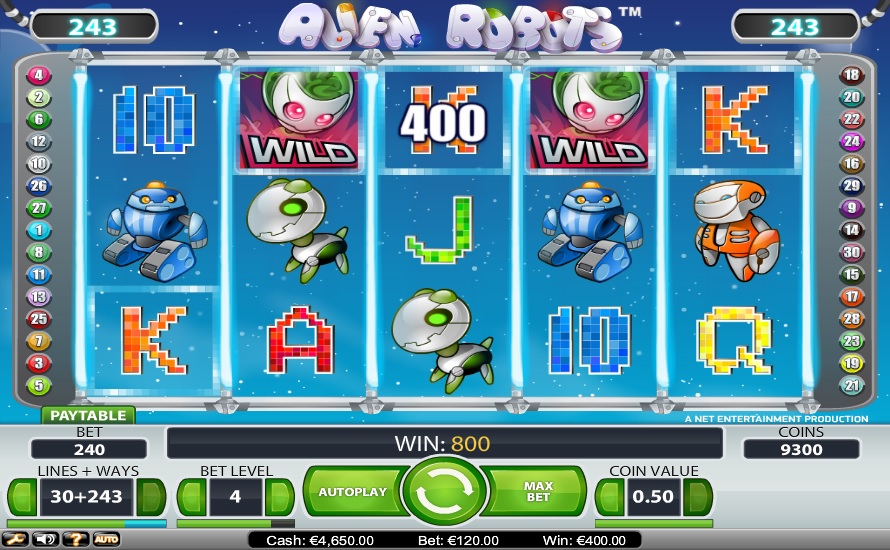